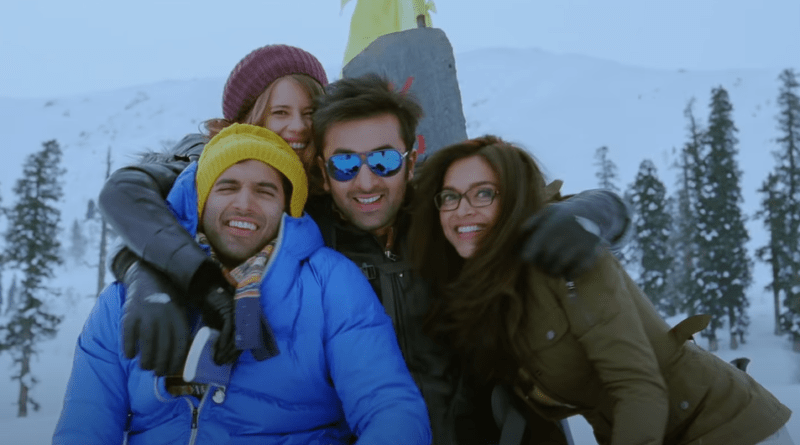 Bollywood has been quite rich in genres since ages, varying from thriller movies to romantic ones to comedy ones. All these movies, in some or the other sense, depict friendship and there are movies which revolve on the main storyline of friendship. Bollywood friendship movie has been one of the most favorite genres of audience, it has been setting bars for the viewers from Jai and Veeru in Sholay to Kabir and Avi in Yeh Jawaani Hai Deewani. Here’s a list of top 15 Bollywood movies that redefined Friendship:

This movie revolves around the life story of four friends, who go on a trip together and end up being best of friends. The movie begins with Naina, an introvert reuniting with Aditi, her school friend in a store and then joining her in a trip to Manali along with two of their other school friends, Kabir and Avinash. On their trip together, Naina falls in love with Kabir. After a few years, they reunite at Aditi’s wedding and then the movie ends with Kabir and Naina as a couple. Such bollywood friendship movies that redefined friendship shows us the way these four friends made the most out of their lives and inspire us to get some time from our busy schedules and contact our friends. It is important to stay in touch with your old friends while making new ones too.

Three friends, Kabir, Arjun, and Imran decide to go on a bachelor trip before Kabir’s marriage with Natasha. They had a long standing pact: Each one of them chose an adventure sport without telling each other. All of them were supposed to participate in each sport. The trip leads them to heal wounds, combat their worst fears and fall in love with life. Meanwhile, Kabir falls in love with her swimming instructor Laila. The film inspires us to pack our bags and plan a trip with our long lost friends, work isn’t everything, it is important to take a break and chill with your buddies.

A son’s suicide forces his father Aniruddh to take a trip down his memory lane and recall his hostel days. In the hostel, they were a group of six friends who were from a batch called Losers because they ended up losing the college tournament every year. They practiced hard, supported each other and with each other’s back, won the game. In midst of all these college days, Aniruddh falls in love with Maya and marries each other but later on, decides to end their marriage. Apart from giving lifelong friendship lessons, the story also focuses on gaining self confidence even in the toughest of times.

Kalindi, with her friends Avni, Meera and Sakshi take a trip together to Thailand after each one of them finds about the serious problems they face with their lives, mainly revolving around marriage or love. This is a must watch movie for relieving your stress and calling your friends. After all, they are the real stress busters. This bollywood friendship movie has even disbarred the social steretypes revolving around the female section, providing more equality to them.

During the college days, Rancho, an engineering student, gets to bond with Farhan and Raju, due to his unique and exciting approach towards every problem. He was an energetic and refreshing student who made their friends’ lives as fun as possible. Due to a bet, they reunite after a few years wherein Raju and Farhan go on a search hunt for Rancho, whose existence seems evasive. Such bollywood movies that redefined friendship tells us that there will always be problems till the day we die, but what matters is our approach towards the same. With supportive friends on side, even a problem as big as an elephant seems as tiny as an ant.

The movie begins with a best friend duo, Anjali and Rahul chilling in their college days, and then Rahul falls in love with his Principal’s daughter, Tina. Anjali, on the other hand, falls in love with Rahul but fails to confess her love and moves away. Tina dies soon after her marriage with Rahul and due to some coincidences, Rahul reunites with Anjali and marries her. Friendship is the first step in everything, whether it be love or marraige, one need to be friends with each other, understand each other and be each other’s support during thick and thin times.

Aman, a jolly person full of happiness and love, comes to New York and gets along with everyone very easily. Meanwhile, Naina, Aman’s neighbour led a dull and wearisome life finds a new meaning to her life after she meets Aman. She had a friend, Rohit, who falls in love with her and while confessing, got to know Naina is in love with Aman. But Aman decides to set Rohit and Naina because he encountered a fatal disease, which was unknown to everyone, except Aman’s mom. After Rohit and Naina’s marraige, everyone meets Aman on his deathbed. The movie is quite emotional and at the same time, teaches us a lot about friendship, love and family. Even though if an individual himself is facing death, he is trying hard enough to keep his friends happy and together.

Childhood friends, Sonu and Titu’s friendship is put at stake when Titu is set to marry a girl, Sweety, who is not just behind his money but also behind breaking Sonu and Titu’s friendship. Sonu, aware of Sweety’s greedy and manipulatuve tactics try to convince Titu regarding breaking the engagement. But irrespective of his efforts, Titu was ready to marry Sweety. But on their wedding day, Titu had to choose between love and friendship, and he chose the latter one. The years of trust and long lasting friendship cannot be broken by a new found love. Even the song ‘Tera Yaar Hoon Main’ from this movie was a massive hit.

Meera, a stranded and heartbroken girl, meets Veronica, a free spirited party person and moves in with her. After meeting with Veronica’s boyfriend, Gautam, Meera fell in love with him and vice versa. But on finding this, Veronica asks Meera to leave her and go back to India. But later on, she decides to reunite Gautam and Meera and three of them became best friends again. Despite many fights and misunderstandings, a person can’t leave behind their support system, i.e., their friends. Because at the end of the day, you wish to come back to them and share your happiness and sorrows with them.

Kaira, after facing a lot of ups and downs in her career and relationships, contacts a psychologist Dr. Jehangir Khan for her insomnia problem. He uses the friendship method to treat her, they used to indulge in regular therapies and discuss about their lives. She led a positive and happy life after discussing her problems with Mr. Khan and confesses her love for him. But he denies this because of the relationship of a patient and therapist. But even after all this, the story ends on a happy note. Sometimes in life, a person just needs a shoulder to lean on. He/she needs a friend to discuss each other’s issues and happy moments. Bollywood movies that redefined friendship like this one, tells us that a person can have friends irrespective of any age or profession.

The story of five friends, Jiya, Saloni, Neil, Pardy and Lakshya enter into a competition to save their college from getting demolished. All of them, with each other’s back worked hard and won the competition and thereby, saved their college. This was not just a story of friendship but also of co-operation. And this again proves the fact that support from friends is essential to tackle any situation.

Three best friends are separated after completing their college education because of their different approaches towards relationships. All of them reunite and the story ends with all the three friends and their wives sitting together. Sometimes, it is necessary to drift apart for pursuing goals but at the end, everything falls back in place. Because your friends are the ones who will understand you even in your worst moments.

Ayan, a musician meets Alizeh, an independent woman and both develop a strong bond and later fell in love. After going through various stages, it occurs to them they cannot stay together. But later on, Ayan finds out that Alizeh is suffering from cancer and won’t survive for a long time. Both of them decide to keep theur friendship alive and stay together until she dies. This movie inspire us to at least keep our friendship alive when love cannot find it’s place in the bond.

Two friends, Kunal and Sam pretend to be a gay couple to find an apartment together. But both of them end up felling in love with their flatmate, Neha. But later on, they find out that Neha is in love with another person. The title itself revolves around friendship, and the story again reminds us of keeping friendship in place where love cannot fit. Even though Neha loved someone else, the three of them remained good friends.

Jai and Veeru, a pair of thieves were hired by Thakur Singh to surrender Gabbar to him for a reward. By the end of the movie, while trying to catch Gabbar, Jai dies in Veeru’s arms. Seeking revenge for Jai’s death, he catches Gabbar and hand him over to the police. But this duo still remains in the hearts of many due to their undying love and affection towards each other.

These bollywood movies that redefined friendship can make you go and hug your best friends. Because at the end, our souls crave for the love and support we deserve. These movies gave a new definition to friendship and surely serve as a great source of entertainment at a get together or a night stay. Rekha and her guide to womanhood, freedom, career and transformation