As the economy is opening its borders to various nations, so are the minds of people to progressive thinking. Earlier, declaring sexuality as gay or lesbian was considered a taboo in society, but now the world is taking pride in the way God has made them. The way a person’s inner self is built, it’s not his/her fault, instead, the world should accept them as they are. India took a revolutionary step in 2018 when Supreme Court decriminalised homosexuality and repealed Section 377, which banned same-sex sexual activity. Various gay celebrities take social media as a tool to spread the word.

Bollywood movies, besides entertaining the audience, have come far in making the public aware of the LGBT community. The community consists of lesbian, gay, bisexual and transgenders. As Hollywood films and series glorify this thinking, Bollywood movies like Badhaai Do, Chandigarh Kare Aashiqui, etc. also revolve around the story of people who fall within the LGBT community. Many personalities from Hollywood cinema came out as gay or lesbians, people from Bollywood too are slowly taking the stage to announce their sexuality. With gay sex becoming legal, it will take time for the big personalities in India’s celebrity world to come out. Still, a handful of gay celebrities already opened up about their sexuality and eventually, others will too take the stage. Here’s the list of celebrities who are rumoured as gay or lesbian:

A filmmaker by profession, Karan Johar took birth in a Punjabi family to parents Yash Johar, founder of Dharma Productions and Hiroo Johar. He pursued an education at Greenlawns High School, followed by H.R. College of Commerce and Economics. He entered the entertainment industry as an actor in the serial “Indradhanush”. He made his directorial debut with “Kuch Kuch Hota Hai” in 1998, which became a blockbuster hit. Johar made various hit films which contributed well to his popularity.

After his father’s death in 2004, he even took Dharma Productions under him and produced some super hit films, such as Kal Ho Naa Ho, Yeh Jawaani Hai Deewani, etc. The actor-producer even played some cameos and big roles in Bollywood films, like, Om Shanti Om, Bombay Velvet and others. His show “Koffee With Karan” went well too, wherein personalities are invited over to have some chit chat and play games over Coffee.

Karan wrote his autobiography “An Unsuitable Boy”, in which he discusses his sexual orientation. He said, “Everybody knows what my sexual orientation is. I don’t need to scream it out. If I need to spell it out, I won’t”. He never talked about this openly, although he gave hints on a few shows, such as All India Bakchod (AIB) and Koffee With Karan. Johar even became the father of two twins, a boy named Yash and a daughter named Roohi, both of them came to this world through surrogacy. He didn’t even reveal it clearly in his book as well because he thinks that he lives in a country where he could be imprisoned for opening up about his sexuality.

“Whoever tries to bring us down is already below us” – Al E. Gater

Karan receives many negative comments every day claiming him as a shame and pollutant in the country and many more. In fact, the person making such a comment is a shame to the country because of his/her regressive mindset. He rejoiced on the day India passed its judgment on LGBT rights.

The most popular fashion designer designing dresses for the majority of the Bollywood actors was born and brought up in a Punjabi family in Mumbai, Maharashtra. He completed his studies at Sacred Heart Boys High School, Mumbai. While growing up, he took interest in fashion, styling and costumes in the Bollywood industry. He often recreated her mother’s sarees and this grew his interest in the field. He pursued Arts at Elphinstone College, and at the age of 19, he got into modelling ad campaigns for some brands. In 1987, he began taking custom orders for customers by hiring tailors.

Though he never pursued formal education in this field, his interest in fashion kept him dedicated and motivated. After entering the film industry by designing the actors, he gained fame and maintained the same. His business grew at such an exponential rate that he even started his own line of beauty products under the brand “My Glamm”.

Though he never made any revelation about his sexual orientation, he is rumoured to be gay. In a post with Karan Johar on his birthday, a user complimented the picture “You guys are the cutest couple”. Later, when Manish liked the comment, it spread like a fire on social media and people started speculating about their relationship as a couple. He unliked the comment as it started spreading rumours, but this action took a reverse turn when the news started spreading even more. But the designer thrashed all those claims by addressing them as fake. Though they never accepted or rejected their same-sex relation, the public won’t stop making rumours.

Based in Goa, this filmmaker bagged several National awards for his excellent films, such as Shahid, Simran, etc. He made his OTT debut with the series “Criminal Justice: Behind Closed Doors”. Apurva wrote in his film “Aligarh” raising his voice for the LGBTQ community wherein a professor lost his job after he revealed his identity as a homosexual.

In 2020, he came out on Twitter introducing his male partner, Siddhant and their struggles. They bought a home together in Goa after hiding their identities for 13 years and staying together as cousins. Apurva posted a picture of them together with their nameplate which read Apurva and Siddhant. He proudly announced their same-sex relationship by asking the public to normalise LGBTQ families. The gay couple after staying together for 14 years parted ways last year. Asrani shared a picture quoting their separation as mutual and requested to respect their privacy. They became the first generation couple in India to live their love visibly and courageously. They surely became an inspiration for all the same-sex couples out there, giving them a ray of hope and love. Such gay celebrities paved the way for many more.

Popular as Bobby Darling in Indian cinema is a Bollywood transgender actress. Born and raised in Delhi, she revealed her identity at a very young age, which caused troubles in her family. Her mother died during her teenage days. A reality show named “Sacch Ka Saamna” helped her reunite with her father in 2009, wherein his father came as a special guest. She always remained a strong supporter of the LGBT community and their rights. Many films featured the actor, such as Shirin Farhad Ki Toh Nikal Padi, Money Hai Toh Honey Hai, Kyaa Kool Hai Hum and others.

Born as a boy, the actor underwent a sex change operation through a breast transplant in 2010. She appeared in the first season of Salman Khan’s show “Bigg Boss”. In 2015, she declared her marriage to a Bhopal based businessman, Ramneek Sharma and they married each other in 2016. But a year after her marriage, Bobby filed for a divorce on the charges of unnatural sex cheating, matrimonial cruelty, breach of trust, and domestic violence. On the basis of Bobby’s complaints, the police threw him behind the bars.

Another fashion designer famous for his luxury line of clothing products and jewellery sells his clothes under the brand “Sabyasachi”. Belonging to a middle-class Bengali family, he studied at the National Institute of Fashion Technology. After attending several fashion shows and designing clothes for them, he started his own venture with a private label. He designed bridal clothes for some of the most beautiful Indian celebrities, such as Anushka Sharma, Deepika Padukone, Aishwarya Rai Bachchan and many more. His television show, “Band Baajaa Bride” provides makeovers to the brides to give them the perfect dreamy wedding. Thirteen brides featured on the show.

“Never ever apologize for who you love” – Crystal Ball

These gay celebrities who came out openly about their sexuality serve as an inspiration for everyone. Having an identity that can’t be revealed properly makes no sense but the orthodox mindset that still prevails in our society make them do so. Let’s come together for a good cause and raise our voices against this regressive thinking. The LGBT community have been granted rights on paper, but what about the public’s minds? When will these minds accept them normally? Let’s love everyone equally because everybody deserves love and care irrespective of sex, religion, caste, or creed. We hope this article gives the readers a redefined mindset on the LGBT community and therefore, let’s change for good. 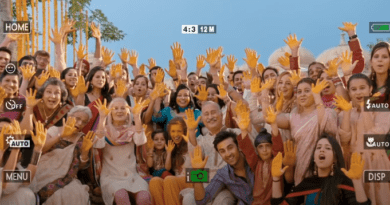 Destination Wedding: Top 10 Bollywood movies that featured the most beautiful ones!